For the next series I need a prop coffin. Since a real size coffin would be expensive to make and hard to store, I made it from xps foam in 1:6 scale (action figures). Although a real size coffin in the backyard might have been a great conversation starter… Time will tell if this works with the real size models but at least I got this image out of it. 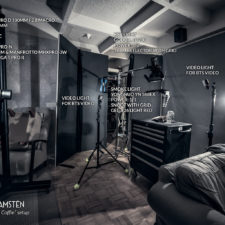 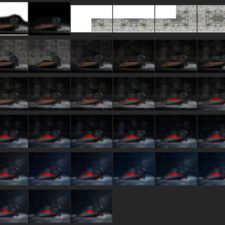 After a quick internet search I sketched the shape of the coffin in Inkscape, printed it and used that to cut the shape from xps foam. Different pieces for the coffin. Pencil and wire brush was used to give pieces a wood texture. Pieces were glued together with a hot glue gun. PVA works too but hot glue is much quicker. Small extra pieces of foam were added to corners. I painted the foam with my black PVA primer. It’s a mixture of PVA glue, black paint and acrylic varnish. It should protect the foam. Burnt amber was used for the base color. Watered-down raw sienna was then added sloppily to not cover the base coat completely. Dry brushing the high lights. I also use cheap makeup brushes for painting. They work nicely for some jobs. I found an old metal skull from collections and cutted the back half off with a dremel. Then it was glued to cover again with hot glue. Some filler was added to sides. Black wash, which is just heavily watered down black paint, was added to darken the coffin a bit and bring up the details. Second round of dry brushing to highlight the edges and details. Headstone was also cut from the xps foam. It was textured to look stone with an aluminium ball rolled over the foam. R.I.P. text was printed with a 3D printer out of PLA plastic and pressed to foam. Cracks on the stone were added with pencil and craft knife. The same black primer was used as in the coffin. Base color for the stone was neutral grey. I collected real moss and dried it in the oven. I mixed it with PVA glue and added it to the cracks in the stone. I should have done this after the black wash as you will see later. Generous amount of black was was added to the headstones. Two layers were needed. Black wash darkened the moss too much so I painted it with green, yellow and brown. Some protective lacquer was added. It was matt but it still added too much shine to the coffin so I had to sand it down a bit.