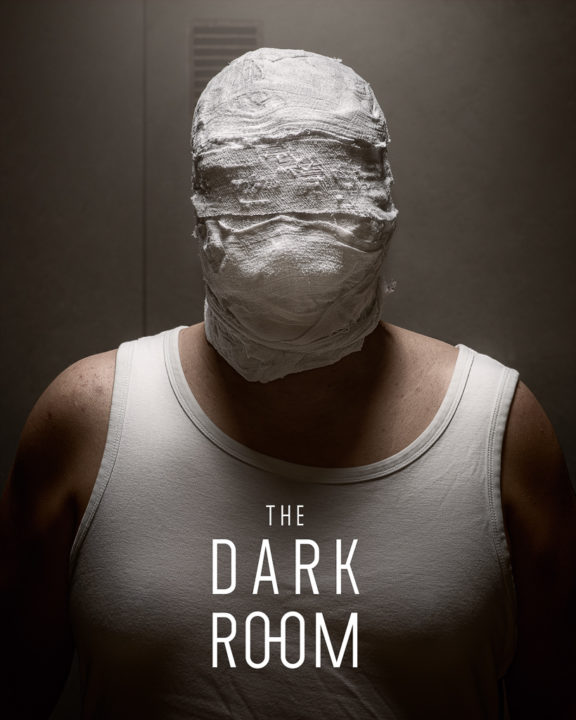 I was listening to my favourite band Sentenced and their album “The Cold White Light”. While listening I started thinking “Should I make images from the songs in my favourite album?”. Well, that was the original plan in February 2020. Now ideas have gone on their way and I have over forty sketches in my sketchbook. I have picked some pieces from other bands too like Queen, Metallica, Mötorhead, Stam1na, …

When ideas started to circulate I ended up pretty quickly in the idea that all the images would have the same environment. Some kind of room or a cell with a dark and depressing feel. It was clear from the beginning that images would also have some surreal and dreamlike elements. It is a collection of images of what a dark mind might look like from the inside. With all the destructive thoughts that circulate in the brains and feelings that take you down. The dark room inside of your head. I have myself suffered depression which eventually led to retirement from my computer engineering job. On the contrary, many might think dark topics are therapeutic and make me feel better and not the other way round. The same goes for very dark lyrics from bands like Sentenced.

I have done quite a lot of self-portraits and because of the pandemic, it was an easy decision to get back to the roots of how I started photographing people and do this as a self-portrait project.

Next, I had to think about how to do this on a tight budget. Building the room was not an option. I was going to photograph these in my home studio (aka living room), so the room had to be built digitally. Some of the bigger props like the coffin and guillotine were also out of reach in real size so I decided to make those on a 1:6 scale. 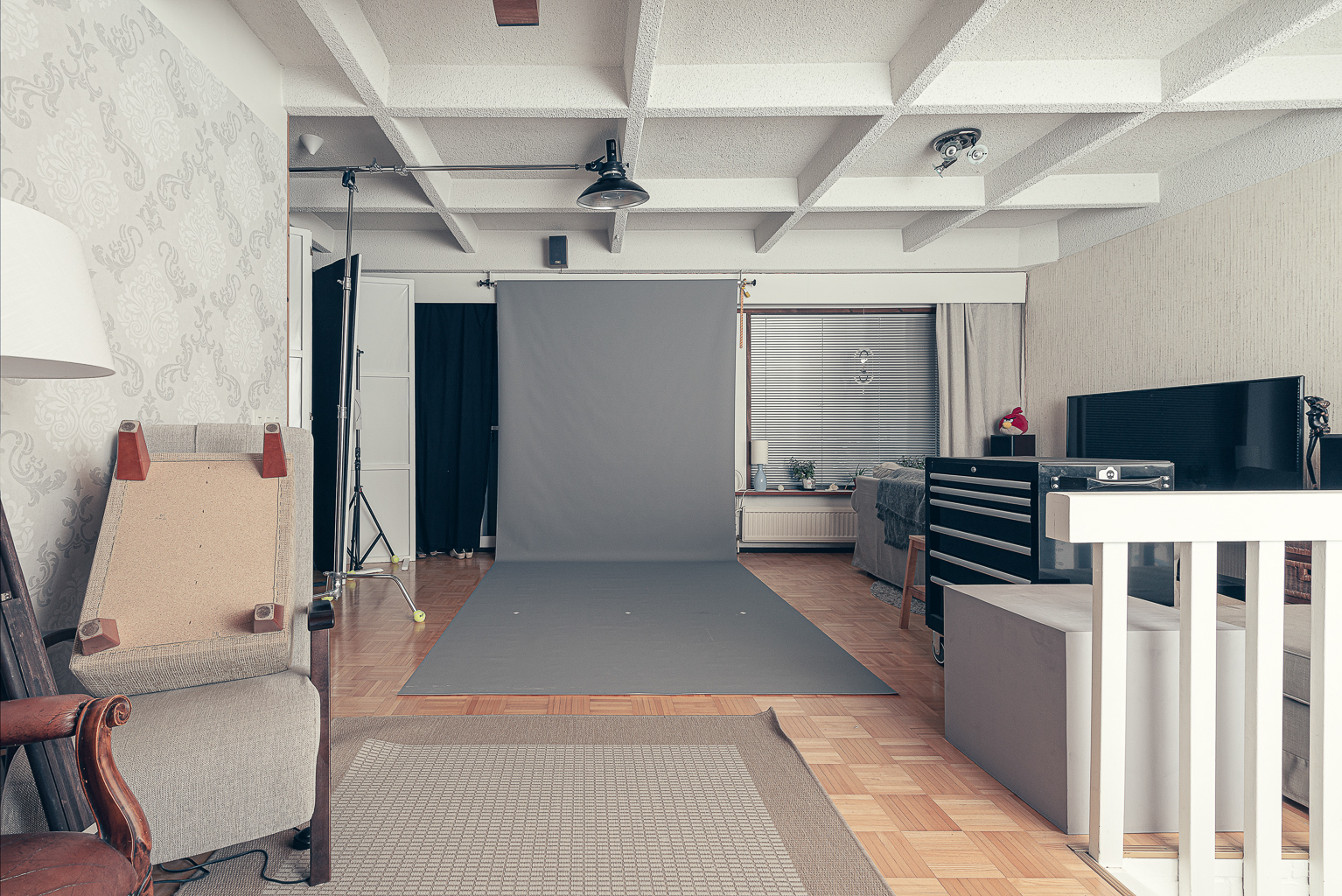 I often like my characters don’t show eyes in my images. I think that the character is a much more impersonal and image less portrait when the eyes don’t show. It kind of gives more room for the actual story in the image.

I ended up using a simple outfit with a sleeveless shirt, trousers from the army snowsuit and a mask. I wanted it to be clean and not colourful so it won’t take too much attention. The shirt and trousers were easy to obtain but a mask I had to make myself. Since this is a self-portrait series and I’m working in a home studio on my own. I have to take the mask off constantly after usually five frames (visibility in the mask is very limited as is expected). So wrapping the bandage was not an option for every shot. After some DIY work, I managed to get the look I wanted to a mask that is relatively fast to put on and take off. 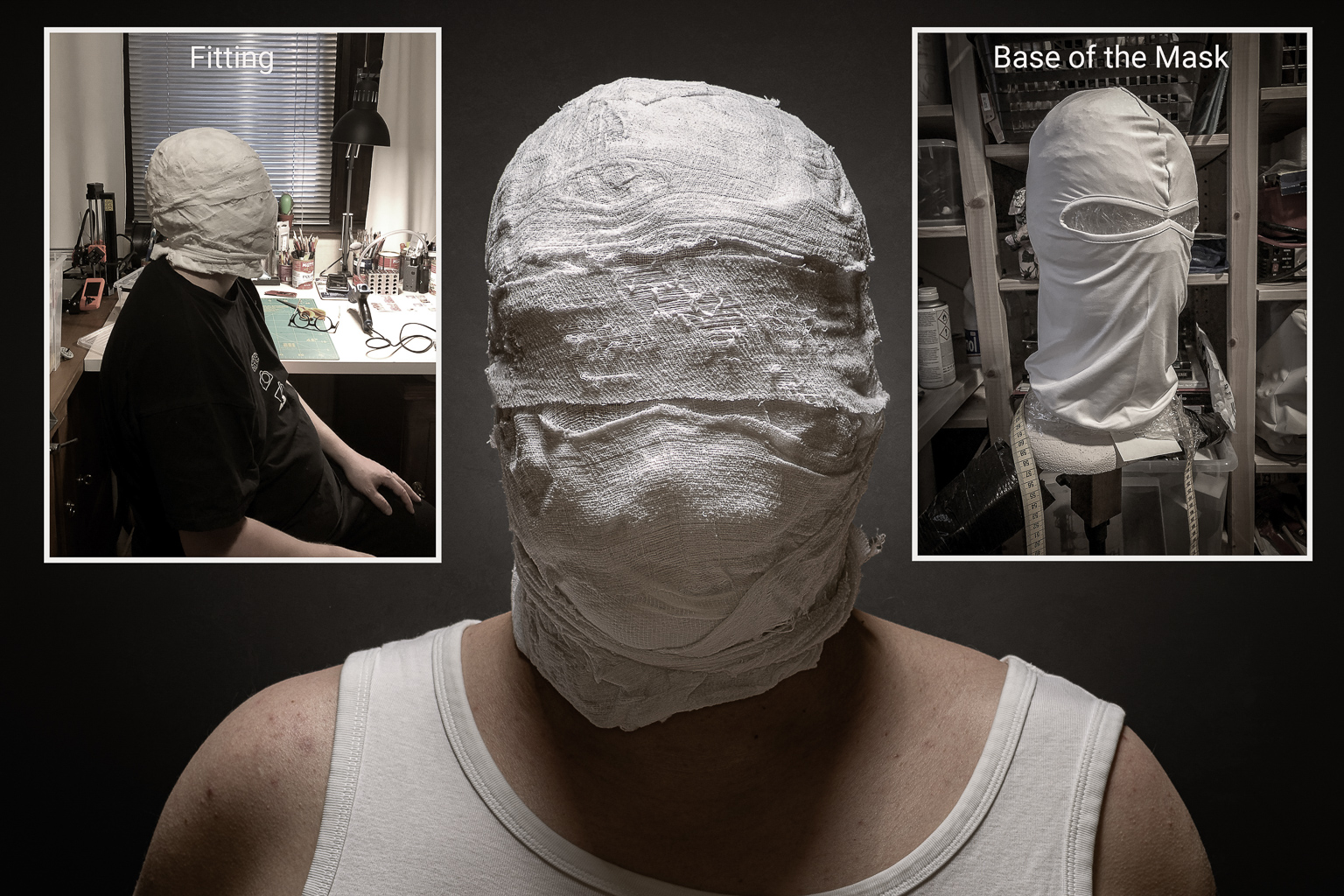 I used as many real props that were possible like a phone, razor, skeleton (which I have already used as a mannequin for testing lighting and setup shots) but some were just too big to build. I build those on a 1:6 scale. I’m sure the guillotine, coffin and the rest would have been nice in our back yard afterwards but I’m not sure neighbours would have liked those as much I would have.

For photographing 1:1 images and 1:6 models I measured 1:1 setup precisely to be able to reproduce it and also to scale it down for the 1:6 models. The goal was to get a similar perspective and light to both 1:1 and 1:6 images. Real shadows were important too since they are not so easy to do in photoshop. When mixing 1:6 to real size images in photoshop I had to use some liquify and puppet warp to match images. But after all the careful preparation I had done, they fitted together quite nicely. 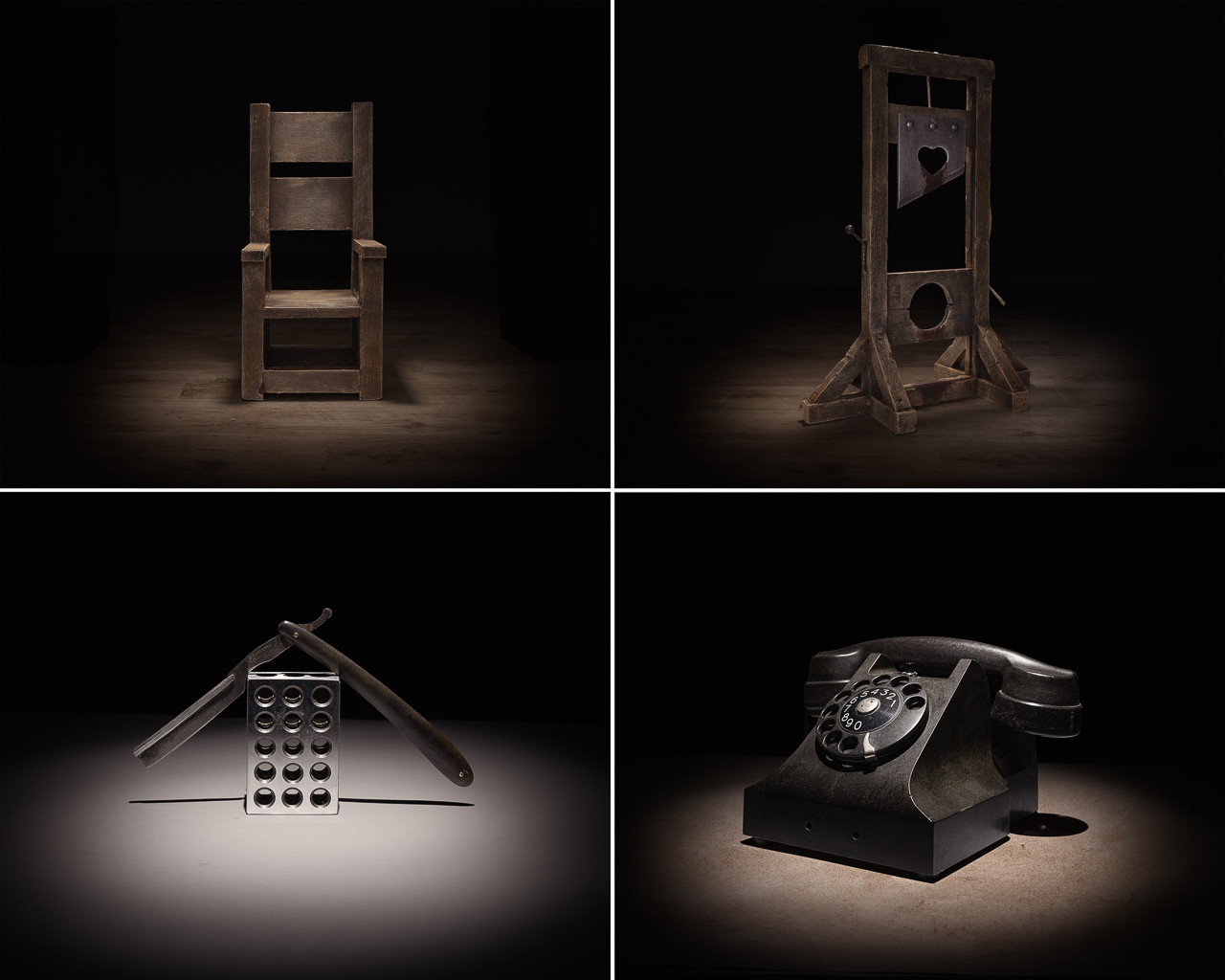 To get the room I wanted without breaking the bank I build the background completely in photoshop. All photos were shot against a grey background and walls and details added in the post. I find that grey background works very well when you are planning to add an environment using textures in the post.

I have always photographed also interesting textures and details for later use, so my personal collection of textures have grown quite big over the years. I was able to use those to build the environment for this image series. I managed to get it pretty much how I liked it. A dark and distressing room. 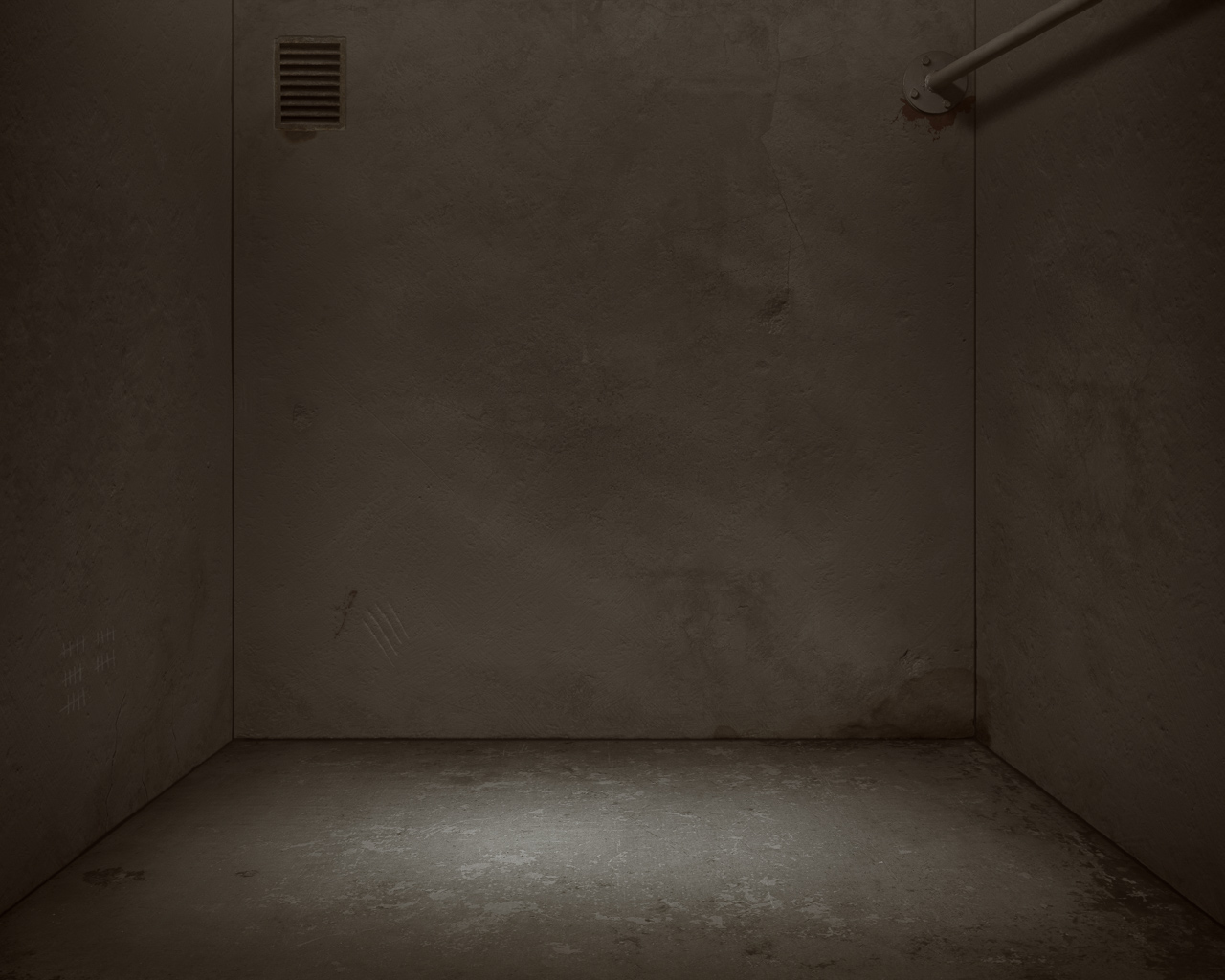 I’m not arguing that it wouldn’t be nice to have a budget to make this in real life in a real studio. But I’m pretty sure that will not ever be possible. However, with 1:6 models and photoshop, I can make my ideas into images without making compromises that I do not want to make. And at the same time keeping the budget decent for an amateur photographer. 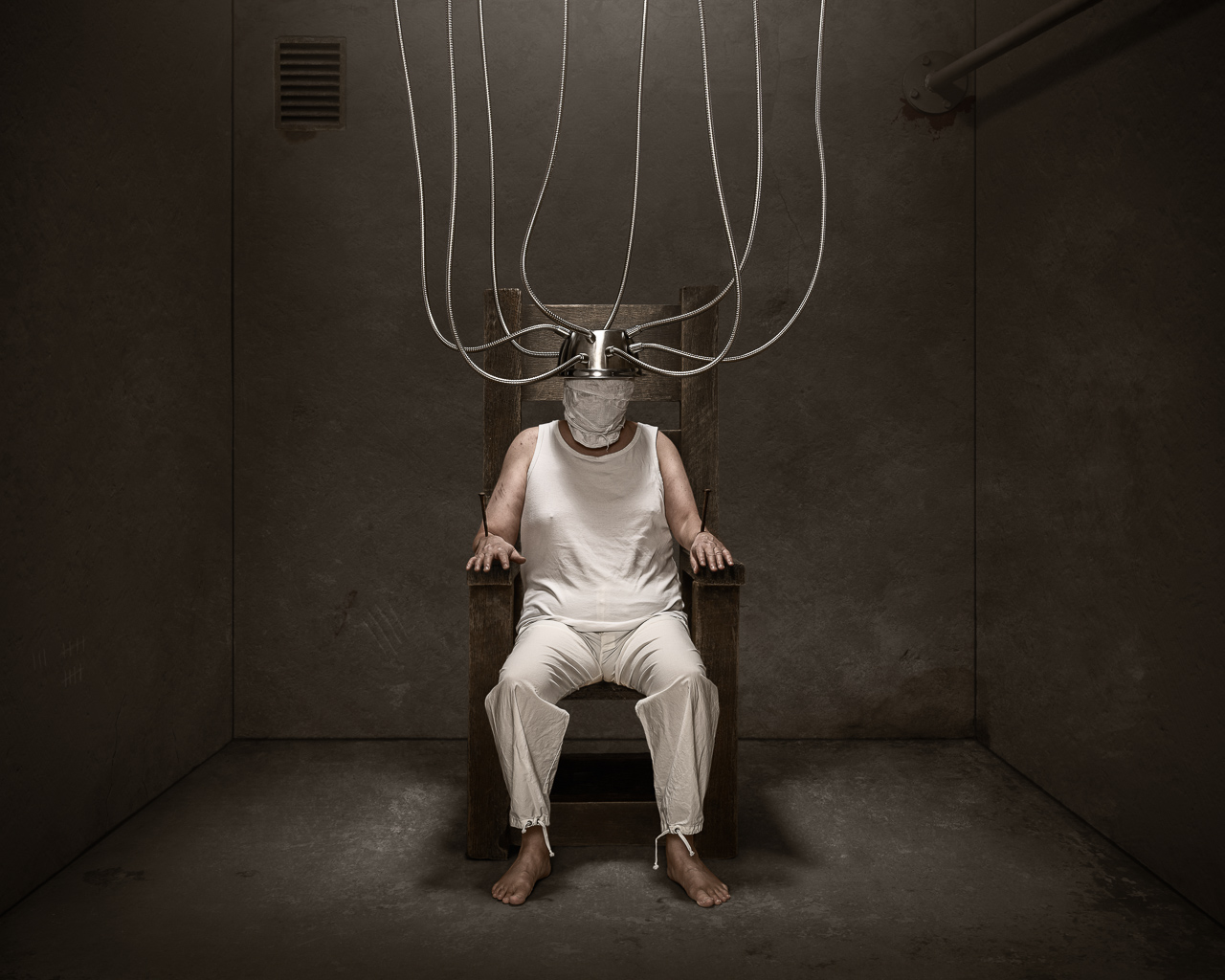 Chair is 1:6 scale, “helmet” is a kitchen bowl and conduits are shower hoses. 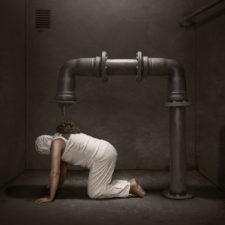 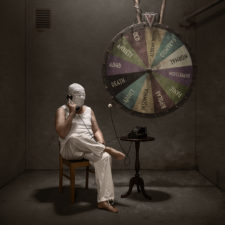