For some reason I have couple of gnome pictures for this week. Lighting was a simple one light with reflector setup, so there’s nothing special. I had this doorway photographed earlier from Puijo Tower and had an idea of a gnome standing in front of it. Gnomes live in forests, I guess, so I took some forest pictures and added the doorway to a tree. Snow image is couple of years old and I think someone told me then that you could easily see gnome peeking behind the tree. During gnome shoot I took one picture with this idea in mind and made a quick picture with the old snowy scene. To finish the gnome week I also made a studio image just from the gnome. During editing I made the gnome shorter and wider from the stomach area. Feet were given a Hobbit treatment, I made them bigger and added some hair. I modified ears to be more elf like and made eyes and nose a bit bigger but only slightly since the eye glasses were already pretty bold. 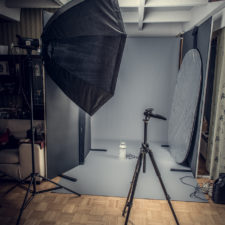